Constructivist Foundations appears three times a year and is available free of charge to its registered readers. Papers are published in an appealing format ready to be printed by the reader. Even though the journal is predominantly distributed electronically our policy is to never change the content after publication to allow for reliable citations in terms of volume, number, and page. The URLs of article pages are permanent and short, following the general format http://constructivist.info/volume/number/page

With Humberto Maturana Romesín one of the most important thinkers of the 20th and 21st century has passed on 6 May 2021. He introduced a new view on life and cognition that has influenced and will continue to influence many scholars. Maturana created new concepts such as autopoiesis and structural coupling that have become “household names” in countless areas. Please pay a tribute to his intellectual heritage and check out his publications, many of which are available at https://cepa.info/author/maturana-h-r 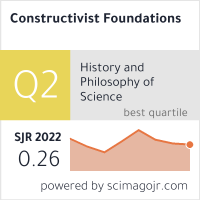 According to Scimago Journal & Country Rank, Constructivist Foundations is a leading journal (Q1) in three areas:

1. Philosophy,
2. History and Philosophy of Science, and
3. Multidisciplinary Research.

Furthermore, it is Q2-rated in Education and holds position 153 among 602 Artificial Intelligence journals.

Submissions of papers that correspond to the Aims and Scope of the journal are always welcome. In addition to regular issues the journal publishes also special issues focusing on a specific topic.

> See also the Editorial of the Initial Issue (PDF) and What are constructivist approaches?

Others seek to avoid the dualistic position. Either they skeptically reject that the structures of the real world can be compared with mental ones, independently of the senses through which the mental structures were constructed in the first place (e.g., von Glasersfeld), or they embrace a phenomenological perspective that considers perception as the grouping of experiential complexes (e.g., Mach).

All these approaches emphasize the primacy of the cognitive system (e.g., Llinás) and its organizational closure (e.g., von Foerster, Maturana). Hence, perceived patterns and regularities may be regarded as invariants of inborn cognitive operators (e.g., Diettrich).

Constructivist approaches can be said to differ also with respect to whether constructs are considered to populate the rational-linguistic (e.g., von Glasersfeld, Schmidt) or the biological-bodily (“enactivist/embodied” theories, e.g., Varela).