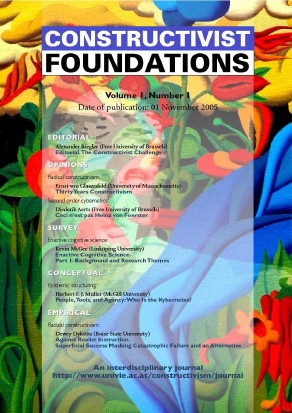 Excerpt: In 1974… I wrote a chapter assembling some philosophical precedents and presenting my interpretation of Piaget’s theory. It was the first time the epithet “radical” was used. It was intended in the sense that William James had used in his radical empiricism, i.e., meaning “going to the roots” or “uncompromising.” I chose it because at the time many developmental psychologists were mentioning Piaget’s constructivism but without going into its epistemological implications. What they called construction seemed to refer to the fact that children acquire adult knowledge not all at once, but in small pieces. I did not think that this was a revelation and therefore called their approach “trivial constructivism.” It was clearly no way to gain the friendship of traditional psychologists but in the long run it did not do much harm.