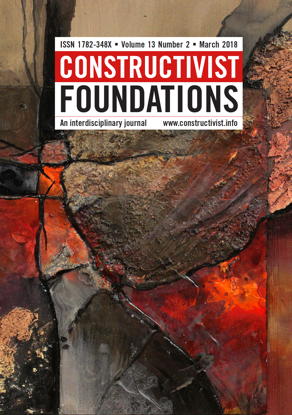 Context: Philosophical and - more recently - empirical approaches to the study of mind have recognized the research of lived experience as crucial for the understanding of their subject matter. Such research is faced with self-referentiality: every attempt at examining the experience seems to change the experience in question. This so-called “excavation fallacy” has been taken by many to undermine the possibility of first-person inquiry as a form of scientific practice. Problem: What is the epistemic character and value of reflectively acquired phenomenological data? Can the study of experience, despite the excavation fallacy, rely on the act of reflection on lived experience and make sense and use of its results? Method: Through a philosophical discourse, informed by empirical first-person inquiry, we explore the experiential structure of the act of reflection and the formation of the corresponding belief about past experience. Results: We present a provisional first-person model of the experiential dynamics of retrospective reflection, in which the reflective act is characterized as enaction of belief about past experience that co-determines - rather than distorts - its results. From a constructivist perspective on the inevitable interdependence between the act of observing and the observed, the excavation “fallacy” is recognized as an intrinsic characteristic of reflection. Reflection is described as an iterative, self-referential process, guided by a context- and subject-specific horizon of expectations. Implications: Knowing the characteristics of the formation of beliefs about experience is essential for understanding first-person data and for the possibility of their acquisition and use in scientific practice, particularly in the context of second-person approaches to the study of experience. Constructivist content: We relate the proposed understanding of reflection to constructivist epistemology and argue that constructivism provides an epistemological foundation for the empirical study of experience more suitable than the traditional epistemological objectivism of cognitive science. We suggest that the constructive nature of the process of reflection calls for a collaboration between the fields of constructivism, phenomenology, and first-person research, and points towards the potential for their mutual enrichment.

Valenzuela-Moguillansky C., Demšar E. & Riegler A. (2021) An Introduction to the Enactive Scientific Study of Experience
Kordeš U. (2016) Going Beyond Theory: Constructivism and Empirical Phenomenology
Müller K. H. (2010) The Radical Constructivist Movement and Its Network Formations
Bednarz N. & Proulx J. (2011) Ernst von Glasersfeld’s Contribution and Legacy to a Didactique des Mathématiques Research Community
Vörös S. & Riegler A. (2017) A Plea for not Watering Down the Unseemly: Reconsidering Francisco Varela’s Contribution to Science