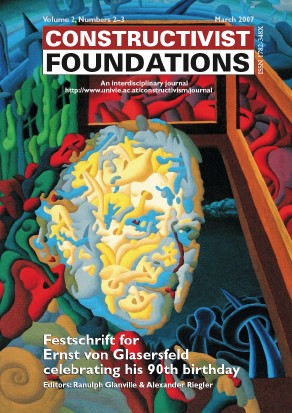 Volume 2 · Number 2-3 · Pages 107–113
< Previous Paper · Next Paper >
The Epistemic Relativism of Radical Constructivism: Some Implications for Teaching the Natural Sciences

Purpose: The relativism inherent in radical constructivism is discussed. The epistemic positions of realism and relativism are contrasted, particularly their different approaches to the concept of truth, denoted (respectively) as “truth by correspondence” and “truth by context.” I argue that the latter is the relevant one in the domain of science. Findings: Radical constructivism asserts that all knowledge must be constructed by the individual knower. This has implications for teaching, here imagined as a sharing of knowledge between teacher and students: it should be done, not by “reporting the true facts” of whatever is being taught, but rather by “telling a story” about it. An explicit distinction is made between the notions of cognitive and non-cognitive knowledge. It is argued that cognitive knowledge (such as in mathematics and science) is characterised by rules that can be unambiguously agreed on by actors who choose to “play the game”; and hence such knowledge is directly communicable from the teacher to the students. Implications: In telling the story of science, the teacher can verify that the students “have got it right,” even though they are all constructing their knowledge individually. In contrast, for non-cognitive knowledge (emotion, preferences, belief, …) there are no such unambiguous rules to agree on, and therefore it is not communicable in this way: in telling this story, the teacher has no way of verifying that the same knowledge is actually being shared. Conclusion: Science teaching should be carried out in the mode of story-telling; it does not need an epistemology of realism.

Quale A. (2007) The epistemic relativism of radical constructivism: Some implications for teaching the natural sciences. Constructivist Foundations 2(2-3): 107–113. http://constructivist.info/2/2-3/107