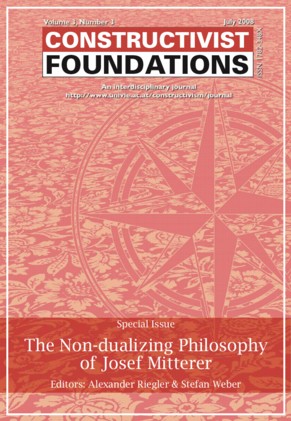 Problem: The underlying assumption of all feminist theories is that in order to achieve our emancipatory goals we have to resolve the so-called female subjectivity problem first. That is, we have to answer the question of what is (is not) the nature/essence/main feature of being a woman. The debate about where and how we should look for that essence seems to be endless and it still continues in contemporary feminist theories. This stalemate blocks the initial political and social power of the whole feminist movement. It also seems to contradict the idea that philosophy can serve practical purposes, which was a driving force behind feminist theories as such. Solution: While analyzing contemporary feminist theories we can discover that they are dualistic with respect to the cognitive situation. Using tools taken from Josef Mitterer’s philosophy and the idea of emancipation developed by Bruno Latour, I want to consider the idea of avoiding stalemate situations in discussions on female subjectivity. I claim that this strategy can be more effective in achieving certain practical goals that are important from a feminist point of view. Benefits: We are able to show that the aim of our theoretical activity is not to agree about what a woman is and what kind of woman we are going to emancipate, but rather to define which problems should be solved in order to improve the situation of women. We just have to learn how to formulate the description from now on of initial matters of concern that is acceptable to all those involved in a given dispute.