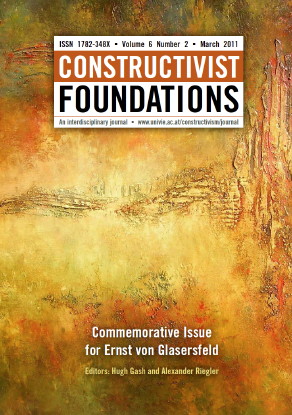 Context: The recent death of Ernst von Glasersfeld opens a space in which there is an important opportunity to re-present and highlight key aspects of his life’s work constructing his model of radical constructivism. Purpose: To make available in a synthetic form one of his particular efforts to elaborate RC in a project that lasted 13 years. This particular project was conducted on the Oikos web site under the title of “Ask von Glasersfeld” and consisted of an opportunity for questioners to pose any type of query directly to von Glasersfeld and normally expect a rapid reply. He was busy composing considered answers right up to his death in November 2010. Method: My intention is to re-present the liveliness of his explicatory interactions with all types of questioners by selecting eight categories of “Questions & Answers” from the web site. Because the selected contents are so extensive these eight categories will be presented in a series of four articles of which this is the first. Implications: This re-presentation of von Glasersfeld’s ideas offers an easily accessible resource for people of all levels of understanding who are seeking to deepen their appreciation of his work. One can come to appreciate not only the lucidity of his writings but also glean “insights” into the person himself, who can be glimpsed between the lines of these various interactions.