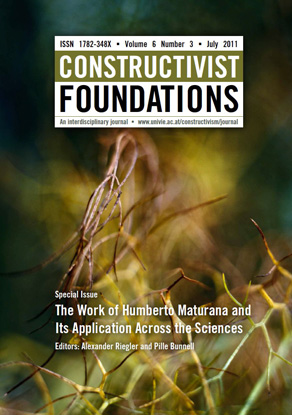 Context: This paper is intended for readers familiar with Humberto Maturana’s theory of autopoietic systems and with the still unresolved debate concerning the existence of non-biological autopoietic systems. Because the seminal work of the Chilean biologist has not yet been fully and correctly understood in other disciplines, I consider that it is necessary to offer a more generalized concept of the autopoietic system, derived by implication from Maturana’s grounding definition. Problem: The above-mentioned debate is rooted in a deficient application of some rigorous distinctions, definitions, and epistemological considerations introduced by Maturana when he coined the term “autopoiesis.” Some researchers think that social or economic organizations could be considered as autopoietic systems of a higher order because they appear to behave autonomously and be self-organized and self-producing. However, in practice some precise distinctions would need to be verified through observation in order to claim properly their autopoietic nature. These distinctions were defined by Varela, Maturana and Uribe in 1974 as a set of six decisional rules (“MV&U rules”) whereby an observer may possibly justify this stand. My aim is to pinpoint clearly the basic cognitive tasks that an observer should perform in order to ascertain such a claim. Method: I accomplish this with a thorough analysis of the entailments derived from each rule when applied to the most general case – when the observational domain where the system manifests itself is not specified. A bottom-up approach is used to avoid referring to “apparent autopoietic behavior” as a starting point distinction (top-down approach): the aim is to distinguish “autopoietic behavior” as an outcome of more basic distinctions, not as a premise for these. These may be used as abstract tools to facilitate a rigorous description of observations and lead to precise explanations of the emergence of complex self-generated dynamic systems. In theory, this conceptual frame is not limited to the macro-molecular domain and may therefore be applicable to non-biological systems. Results: According to MV&U rules, the most important distinctions are those that refer to intra-boundary phenomenology: this focus is necessary to explain how the key processes involved in the emergence of autopoiesis actually manifest themselves. These explanations are crucial to validating a claim about the “autopoietic nature” of an observed system. Implications: This work could help multidisciplinary researchers to apply properly the theory of autopoietic systems beyond the realm of biology and to settle ongoing debates. It could also help investigations related to the specifications of software simulation processes for modeling a minimal artificial autopoietic system. However, the rigorous focus on the role of intra-boundary phenomenology and self-production of components reveals that our chances of detecting “natural” meta-molecular autopoietic systems are scarce.