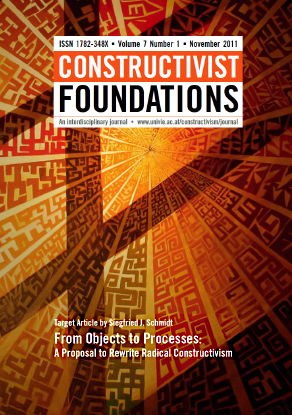 Context: Under the title “Ask von Glasersfeld,” for 13 years the Oikos web site offered the opportunity to questioners to pose any type of query directly to Ernst von Glasersfeld. Purpose: Based on the collected questions and answers gathered on the web site, this series of four articles re-presents and highlights key aspects of von Glasersfeld’s life’s work constructing his model of radical constructivism. Method: The question-answer pairs are grouped into eight categories. Because the selected contents are so extensive, these eight categories are presented in a series of four articles, of which this is the second and which deals with with von Glasersfeld’s views on human experience. The material is divided into two main themes: the first deals with his views on “experiential reality” and the second deals with the issue of “learning.” Results: One of von Glasersfeld’s main objectives was to define clearly that which we can rationally claim to know. As part of this task, in the first section of this article he deals with the question of how we go about constructing our personal experiential reality. The second part deals with his views on how to apply practically the tenets of radical constructivism in a variety of fields. He is especially interested in redefining what “learning” means and in creating novel approaches to teaching and training students. Implications: This re-presentation of von Glasersfeld’s ideas offers an easily accessible resource for people of all levels of understanding who are seeking to deepen their appreciation of his work. One can come to appreciate not only the lucidity of his writings but also glean “insights” into the person himself, who can be glimpsed between the lines of these various interactions.