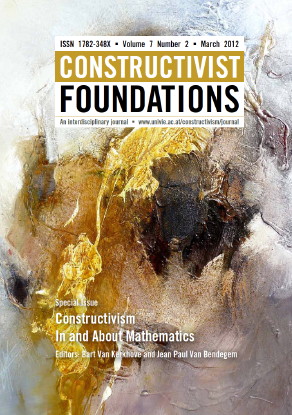 Context: the position of pure and applied mathematics in the epistemic conflict between realism and relativism. Problem: To investigate the change in the status of mathematical knowledge over historical time: specifically, the shift from a realist epistemology to a relativist epistemology. Method: Two examples are discussed: geometry and number theory. It is demonstrated how the initially realist epistemic framework – with mathematics situated in a platonic ideal reality from where it governs our physical world – became untenable, with the advent of non-Euclidean geometry and the increasing abstraction of the number concept. Results: Radical constructivism offers an alternative relativist epistemology, where mathematical knowledge is constructed by the individual knower in a context of an axiomatic base and subject items chosen at her discretion, for the purpose of modelling some part of her personal experiential world. Thus it can be expedient to view the practice of mathematics as a game, played by mathematicians according to agreed-upon rules. Constructivist content: The role played by constructivism in the formulation of mathematics is discussed. This is illustrated by the historical transition from a classical (platonic) view of mathematics, as having an objective existence of its own in the “realm of ideal forms,” to the now widely accepted modern view where one has a wide freedom to construct mathematical theories to model various parts of one’s experiential world.