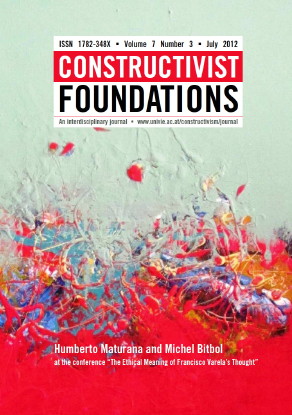 Context: There is an ongoing debate about the possibility of identifying autopoietic systems in non-biological domains. In other words, whether autopoiesis can be conceived as a domain-free rather than domain-specific concept – regardless of Maturana’s and Varela’s opinions to the contrary. In previous parts my focus was, among other matters, on the rules defined by Varela, Maturana, and Uribe (“VM&U rules”). These rules were viewed as a validation test to assess if an observed system is autopoietic by referring to Maturana’s ontological-epistemological frame. I concluded that identifying possible non-biological autopoietic systems is harder than merely identifying self-organized dynamic systems that are provided with boundaries and some observable autonomous behavioral capabilities in a given observational domain. This is because no assessment could be valid without examining such systems’ “intra-boundaries” phenomenology and proving actual compliance with the VM&U component production rules. Problem: Any rigorous approach to investigating possible self-production capabilities within a given dynamic system needs to drill down on the composition and physical conditions of the system’s core dynamics. My aim now is to discuss the problem of choosing the adequate spatial and temporal scales to be applied when observing and describing dynamic systems in general. When trying to detect an autopoietic system in a given observational domain, the observer needs conceptual tools to apply rigorously the VM&U rules and decide on the matter. This is particularly useful when dealing with systems with spatially distributed components interacting through cause-effect couplings that are independent of the distance between them, as is the case of social systems. Results: For observing dynamic systems, the choice of appropriate spatial and temporal scales of description is not a trivial operation. The observer needs to distinguish between “instantaneous” phenomena and phenomena possessing extended “durations.” I argue that the observer can easily extend the notions discussed by Maturana and Varela to observational domains where the system’s components do not constitute an entity showing a topological “form” in physical space. Furthermore, I show that a diachronic perspective must be applied by observers to explain component production/destruction mechanisms as the outcomes of processes involving structure-determined coordination over relatively long time intervals. Finally, these considerations lead to establishing a link with Varela’s fundamental concept of autonomy. Implications: The adequate choice of spatial and temporal scales of observation and description are essential (a) to discuss the problem of a possible identification of social autopoietic systems, and (b) to analyze the possibility of designing virtual simulated autopoietic systems in software domains (“computational autopoiesis”).