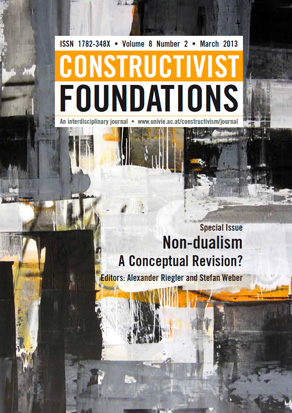 Context: Although Josef Mitterer’s non-dualism has received increasing attention in recent years, it is still underrated by philosophers. It is an ambitious and unusual treatment of epistemological problems concerning truth and reality. Problem: Is non-dualism tenable? Is conceptual relativism tenable? Method: On the basis of a pragmatic semantics, Mitterer’s arguments against conceptual relativism are shown to be unjustified. Results: Non-dualism lacks a clear conception of semantics. Given the similarities to Robert Brandom’s account of truth, as well as Mitterer’s preoccupation with Wittgenstein, pragmatic semantics suggests itself for filling this gap. But then conceptual relativism seems to be the more attractive position. Implications: This paper is a critical survey of non-dualism and a defense of conceptual relativism, but it might also be a worthwhile reading for those interested in semantic issues such as the difference between Ludwig Wittgenstein’s and Robert Brandom’s approaches to “meaning as use.” Constructivist content: Non-dualism is sometimes regarded as an alternative to realistic and constructivist positions in epistemology. This paper, however, defends conceptual relativism, which is a kind of realism that can also be seen as a kind of (non-radical) constructivism.

Hoffjann O. (2013) Public Relations: Between Omnipotence and Impotence
Maturana H. R. (2012) Reflections on My Collaboration with Francisco Varela
Dykstra Jr. D. (2010) What Can We Learn from the Misunderstandings of Radical Constructivism? Commentary on Slezak’s “Radical Constructivism: Epistemology, Education and Dynamite”
Vörös S. & Riegler A. (2017) A Plea for not Watering Down the Unseemly: Reconsidering Francisco Varela’s Contribution to Science
Weber S. (2008) The Object of Description is the Description of the Object So Far: Non-dualism and Beyond